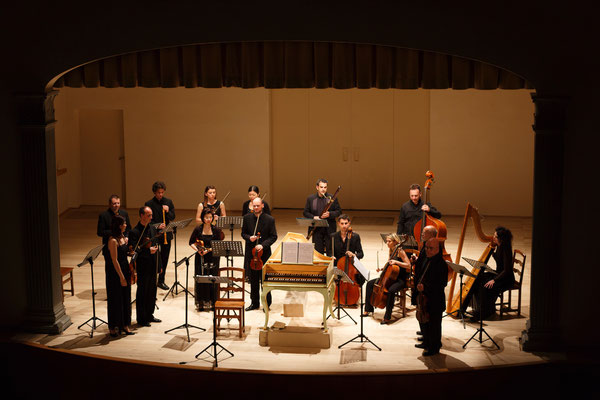 Accademia Hermans began in 2000 from the will of its director Fabio Ciofini who, involved,  overwhelming them with his enthusiasm and his love for Early Music, young instrumentalists and singers eager to master this repertoire and its performance. Since then, a has led the Accademia and its

components, trained in the most European schools, along the path of achieving ever growing support from the Italian and international concert community and collaborations with acclaimed singers and instrumentalists such as Enrico Gatti, Marcello Gatti, Gloria Banditelli, Sergio Foresti, Mario Cecchetti, Mirko Guadagnini, Roberta Invernizzi, Bart Van Oort, Roberta Mameli among others.

For the Bottega Discantica, it released the CD “Il più misero amante” in 2006, recorded in the frescoed hall of the Palazzo Castelli in Polino (TR) and in 2008, a CD of the music of A. Vivaldi (Gloria, Stabat Mater e Dixit Dominus). In June of 2009, a monographic CD of G. Ph. Teleman was released (concerts for various instruments), recorded as part of the Festival “Parco in… Musica 2007” held at the’Abbazia di San Pietro in Valle di Ferentillo (TR). In 2011, the  CD “Requiem” by W. Mozart was recorded in the church of Solomeo (PG), “Mozart - Concerts K.466 and K.467” with the M° Bart Van Oort, produced by the Cucinelli Foundation and published by Bottega Discantica, judged “exceptional” (5 stars) by the magazine, Musica. In 2014, they released the CD with the Stabat Mater di J. Haydn.

In July 2012, for Brilliant Classics, the Accademia recorded the “Scherzi Musicali” by the Abbot Agostino Steffani (XVII sec), which was presented in concert as part of the Bolzano Festival.

The Accademia Hermans has, for some years, carried out intense activities in the promotion of Early Music in the region of Umbria, organising courses, recording Cds in historic locations (palaces and churches) and curating the artistic direction of two Festivals: “Parco in… Musica” in historic locations in Valnerina and “Musica e Musei” in the principal museums of the Region.

It has performed concerts for the most prestigious associations and Festivals of Early Music in Italy and abroad (the Netherlands, Serbia, Swiss, Poland, Spain, Portugal, Germany, England, Finland, Canada, Japan, Mexico and the United States).

It has a continuing collaboration with the Festival Villa Solomei and is the Orchestra in Residence of the Teatro CUCINELLI in Solomeo di Corciano (PG).